The two social networking heavyweights are at loggerheads again. This time Facebook has hit the block button on Twitter’s newest iPhone app; a video-sharing app called ‘Vine’. So, what is Vine? Why has Facebook got the hump? And how can you start making and sharing short snappy videos today? Let’s find out…

Vine is essentially the video version of Instagram. You can use the iPhone app to make videos and then upload them to your social networking feeds. Well, Facebook isn’t exactly being forthcoming, but we’ll get onto that dilemma later…

Vine is owned by Twitter, and it shares their ethos with regards to short and snappy communication. As you know, a message or a tweet on Twitter is limited to 140 characters. This notion is found within Vine, as videos are limited to six seconds.

You can either take one single clip lasting up to six seconds, or you can record several short clips which are effectively threaded together and played on the loop to create quick, snappy, innovative, effective and quirky videos.

These clips are attached to an individual’s tweet in the same way as an image is – with a URL and the ‘view media’ option. This means you don’t have to open a new page in order to view somebody’s Vine video – you simply expand the tweet.

It seems that not everybody wants to get involved with Vine. When the app was launched individuals were allowed to search to see which of their Twitter and Facebook friends were using Vine as well. However, Facebook has blocked this service.

If you try to search for your Facebook friends on Vine you will now be met with the following message: “Vine is not authorised to make this Facebook request.” Nevertheless, many would say that Twitter started this war when they pulled a similar move regarding the friend finder option on Instagram.

Where can you get Vine?

Downloading Vine is easy. It is available from the Apple App Store and it comes free of cost. A lot of people have noted that when they search “Vine” the relevant app doesn’t appear at the top of the list. Thus, to combat this problem simply type in “Vine Twitter”.

How to use Vine: Step-by-step

1) So you want to create your first Vine video clip? You’ll need to start off by going to the homepage and searching for the camera icon. This can be found in the top right hand corner. Click on this icon and a new page will open.

2) The page you will now find yourself on is the camera view. In addition to the camera’s shot, you should see an ‘X’ in the top right corner – click this if you want to exit camera view. Moreover, you will see a status bar across the top – this is black for now, but will start to feature a green line as you record and the time of the video advances.

3) Let’s get to the good stuff now – recording your clip! All you need to do to start recording is to simply hold your finger on the screen. You will know that you are recording because the green line mentioned in point 2 will appear and it will get bigger and bigger as the seconds go by.

4) You are ready to wrap up the clip and finish recording, so what do you do? Simple; take your finger off of the screen.

5) Now it’s time to review what you have filmed. Vine will automatically give you a preview of your clip. Don’t like it? Delete, and start recording again. Feeling happy with what you see? Press ‘continue’.

7) If you are not ready to share your video just yet and you simply want to save it then all you need to do is uncheck “share on Vine”.

8) And finally, add a caption describing or introducing your video and you are good to go!

Clever uses of Vine so far

The app has barely been on the scene but we have already seen some fantastic and innovative videos shared. The first ever Vine video was created by Dick Costolo, the CEO of Twitter. He created a video which he labelled “steak tartare in six seconds”. The ‘how-to’ and instruction type clips are something which we are likely to see a lot of as they are quick, convenient and effective. You can take a look at the quick how-to cooking video by clicking on the image. 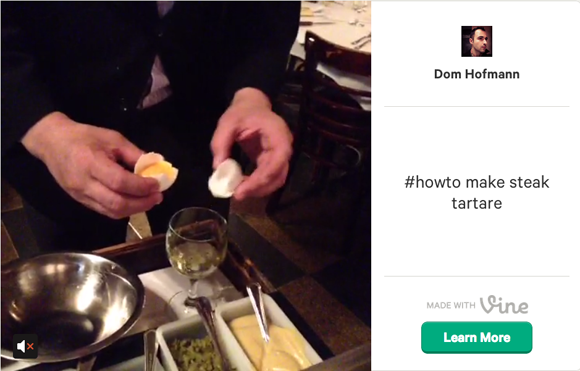 Dog’s Trust used Vine as a fantastic advertising medium. Their Vine clip shows pictures of several dogs which need sponsoring, followed by three messages; “Need a friend?”, “So do they”, “www.sponsoradog.org.uk or text FRIEND to 84118”. This short and snappy format works brilliantly and would have taken literally five minutes to do. See the video for yourself here, just click and see it on Vine: 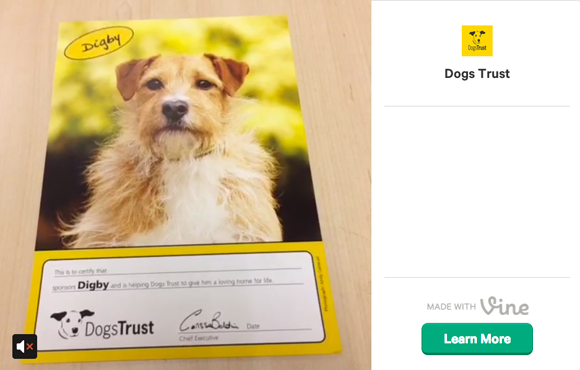 Popular flavoured rum drink Malibu showed the creative possibilities with their first Vine video. Their video was posted on Twitter alongside the caption “when good things come together”. The video showed a bottle of Malibu and a pineapple coming together, with a refreshing glass of Malibu and pineapple appearing and one lucky person grabbing the drink at the end. Take a look: 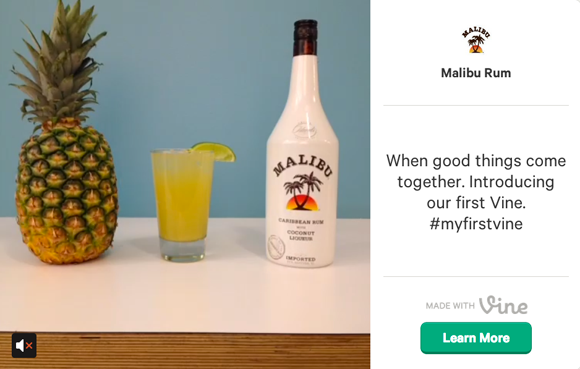 And finally, another example of how Vine can be used is displayed via men’s style website Mr Porter. The company posted a behind the scenes Vine video on their Twitter page which gives a glimpse into what’s going on at the company at the moment. Find out what those at Mr Porter get up to by clicking on the image below. 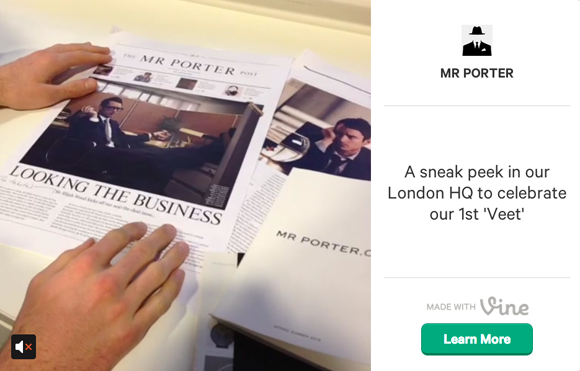