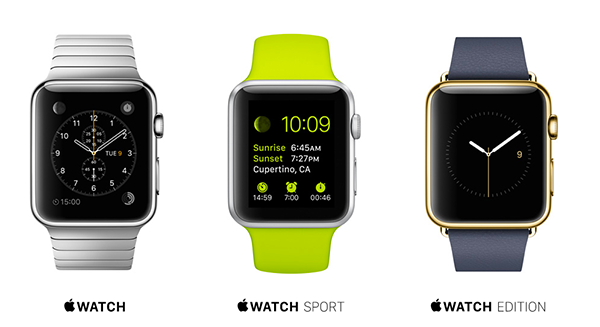 Apple have branched into an entirely new area of wearable tech by releasing their first smart watch; the Apple Watch. This marriage of technology and fashion is one that has been well received based on early reviews, click here for more reviews. Apple has long led the way when it comes to advances in technology, and their smart watch certainly represents this with a whole host of innovative features, such as a heartbeat sensor. Yet, the sleek and stylish design of Apple gadgets is another reason why they are the market leader, and the Apple Watch is no different.

The watch is elegant and smooth in its appearance, boasting sapphire glass and a square face. Users then have the option to choose between six different straps – this includes the likes of a stainless steel strap, a classic leather buckle strap, a leather loop strap and a sport band. The Apple Watch also comes in three different collections – Watch, Watch Edition and Watch Sport – as well as two sizes. Nonetheless, it can certainly prove to be an expensive purchase for those that don’t own an Apple smartphone. You will need one of the iPhone 5 models or an iPhone 6 for full use of the Apple Watch.

Before delving into the exciting new features offered by the Apple Watch, what has truly impressed critics so far is Apple’s ability to combine the classic look of a watch, with their trademark innovative features and practical utilisation all in one. The interface of the watch is truly impressive. Apple acknowledged that the pinch-to-zoom feature of their tablets and smartphones wouldn’t work when replicated on such a small watch face. Thus, they have incorporated ‘watch gears’ instead, which can be used in order to scroll up and down or zoom in, whilst there are also touch screen features.

So, now you know all about the appearance of the Apple Watch and how it works, but let’s face it, what we all really want to know is what cool features the smart watch contains. Here is a selection of the best…

So there you have it… an insight into Apple’s latest product. Who would have thought a watch could steal the spotlight from the hotly anticipated iPhone 6? Oh… and it even tells the time too!

TED Talks: This is what happens when you reply to spam email
February 3, 2016